As the focal point of Lumen 2018 – Crewe’s Nights of Lights – the iconic Municipal Building was brought to life with a mesmerising winter fairy story projection transporting viewers to a spectacular snowy, sooty, Victorian Crewe. The Council aimed to change the perceptions of the area and to attract thousands of visitors to the town centre to see the curtain raised on a spectacular season of lights in the run-up to Christmas. The festive lights switch-on attracted over 11,000 visitors on its opening night. 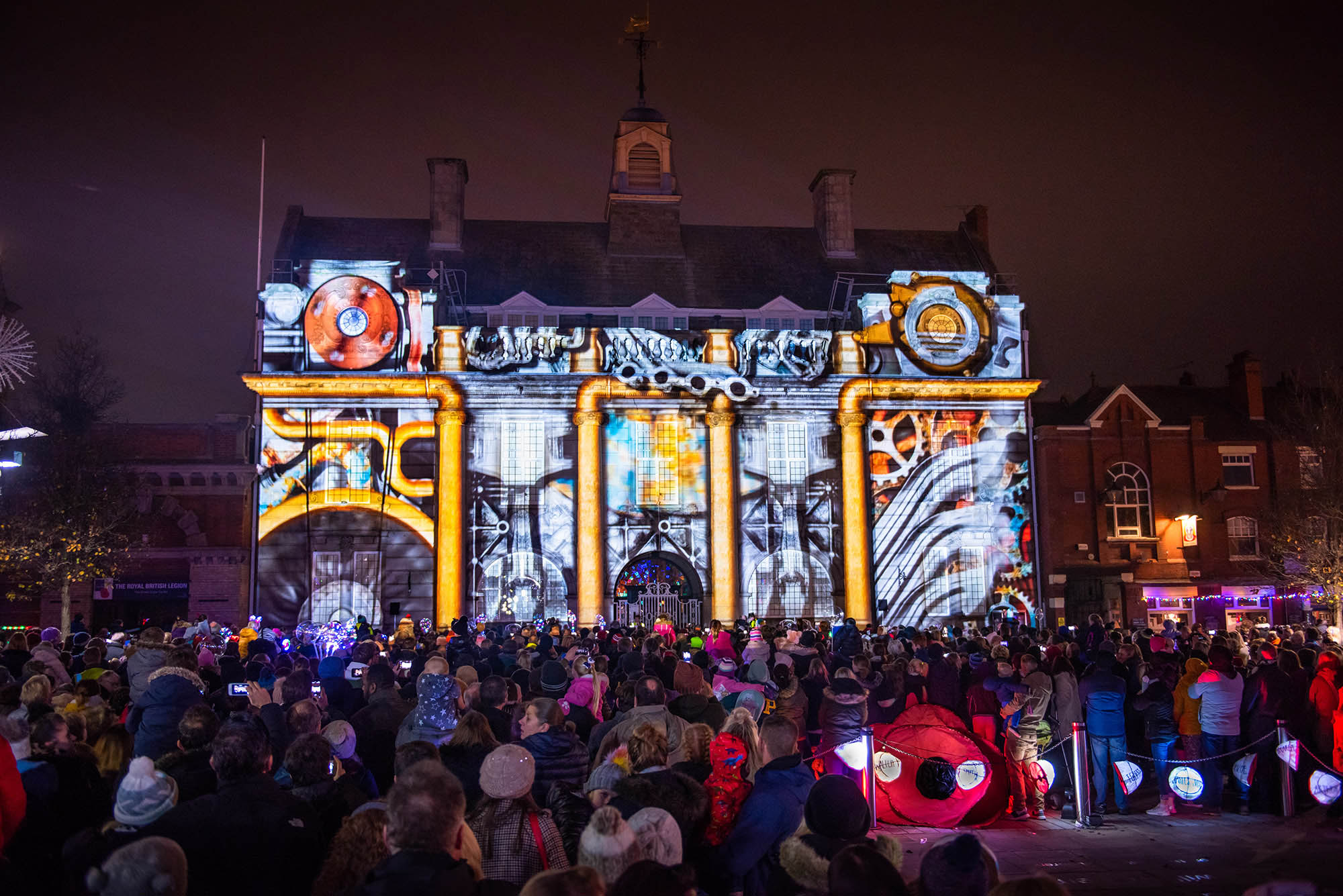 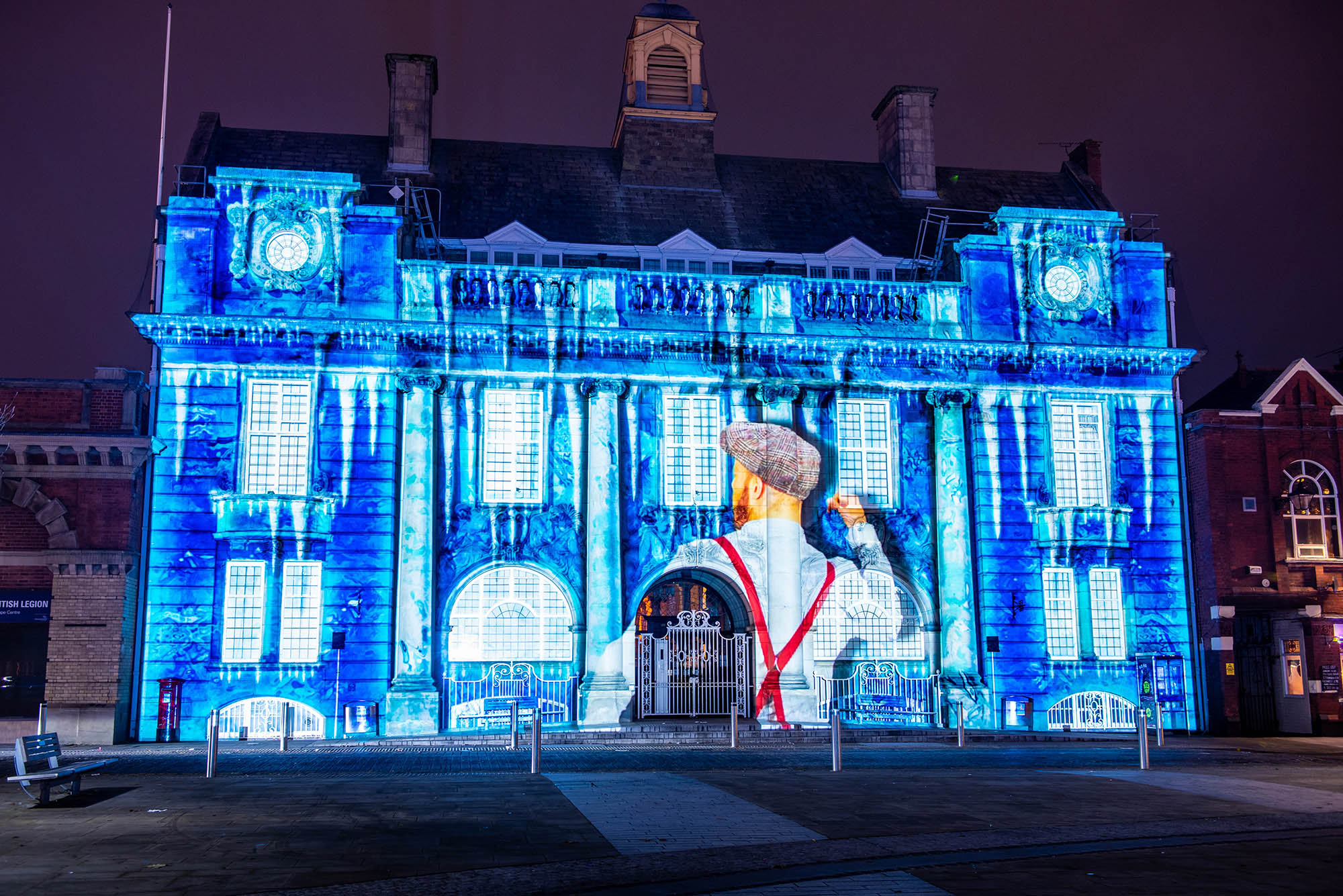 Crewe Town Council tasked Double Take Projections with creating and installing an exciting and engaging family-friendly projection show on their Municipal Building. After an initial site visit, the Town Hall’s facade was photographed from various angles with the resultant images stitched together, creating a high-resolution template of the building. A number of scenes were conceptualised in Photoshop and After Effects with key elements mapped to the building’s features. The festive-themed winter scenes conveyed a sense of fantasy and wonder while giving subtle nods to Crewe’s rich industrial heritage. We avoided the obvious Christmas clichés to make it more inclusive for the multicultural audience.

The projection mapped installation was presented every evening over the Christmas period. The projectors were housed in our custom-built projection trailer for the duration and were scheduled to play the content automatically each night. 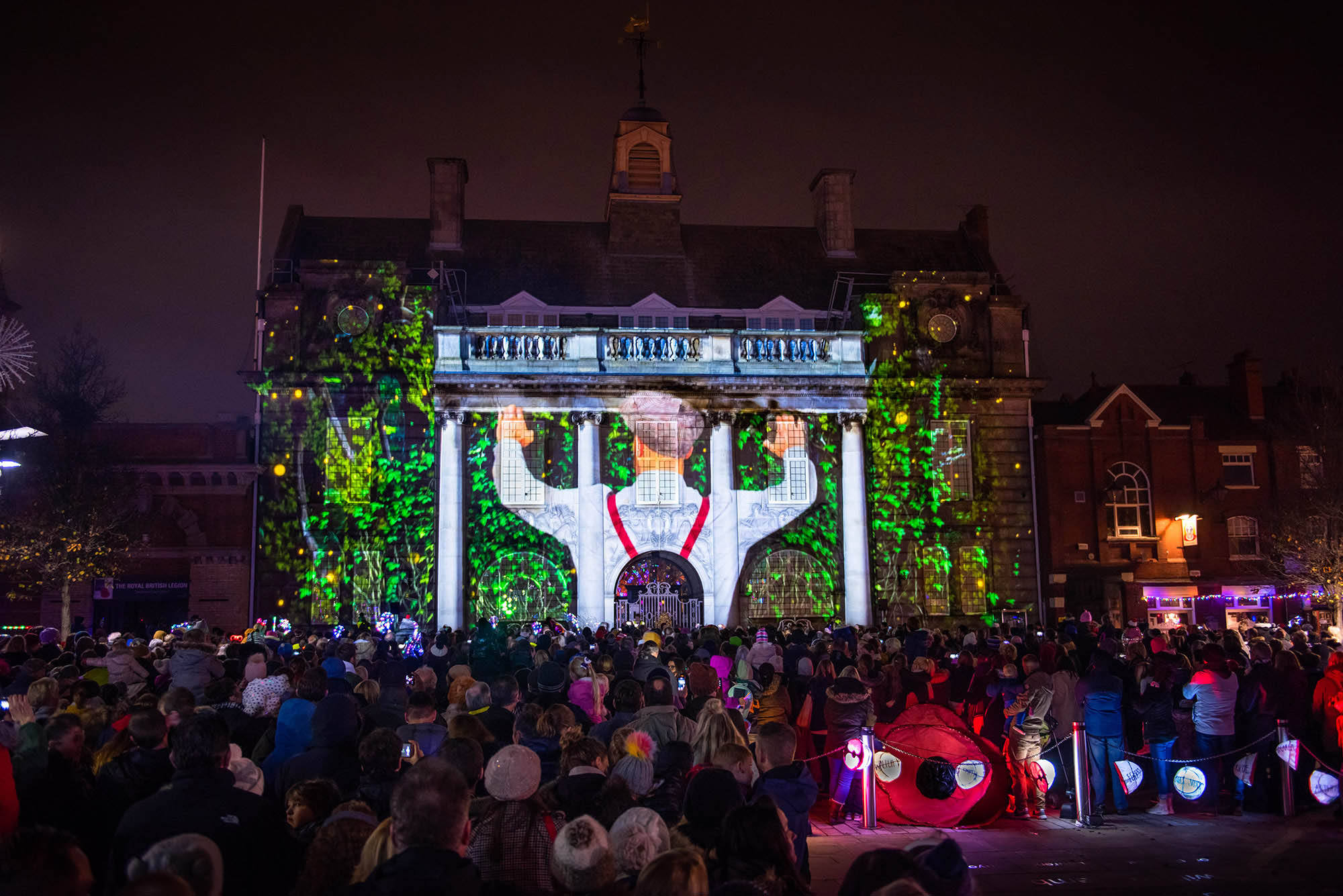 Double Take Projections created an abstract narrative set in Victorian Crewe between two characters – an unlikely pairing, a chance encounter and amorous pursuit. The story was interlaced with the building in its various re-imagined forms. We were keen to work with actors to bring a human element into the final piece. The live-action was filmed in our green screen studio. A scale model of the facade was constructed from green-painted plywood for use in the greenscreen shoot. As well as acting as a reference for the actors in terms of positioning, this also allowed them to appear to interact with the building and create the illusion that they were manipulating the texture of the façade.

Adding an ambient soundtrack to underlie the animation created an ethereal atmosphere. We recorded our own folly sounds and experimented with digital instruments in Logic Pro X to create sound effects. The animation was scheduled on a Brightsign player which allowed the projection mapping show to run every night automatically throughout the Christmas period.

“The month-long Christmas attraction, which projected a winter fairytale onto the frontage of Municipal Buildings, was hailed a huge success after attracting more than 11,000 people on its launch night. A report to organisers at Crewe Town Council reveals it more than doubled the number of people drawn to Christmas light switch-on events in previous years.”
Cheshire Live 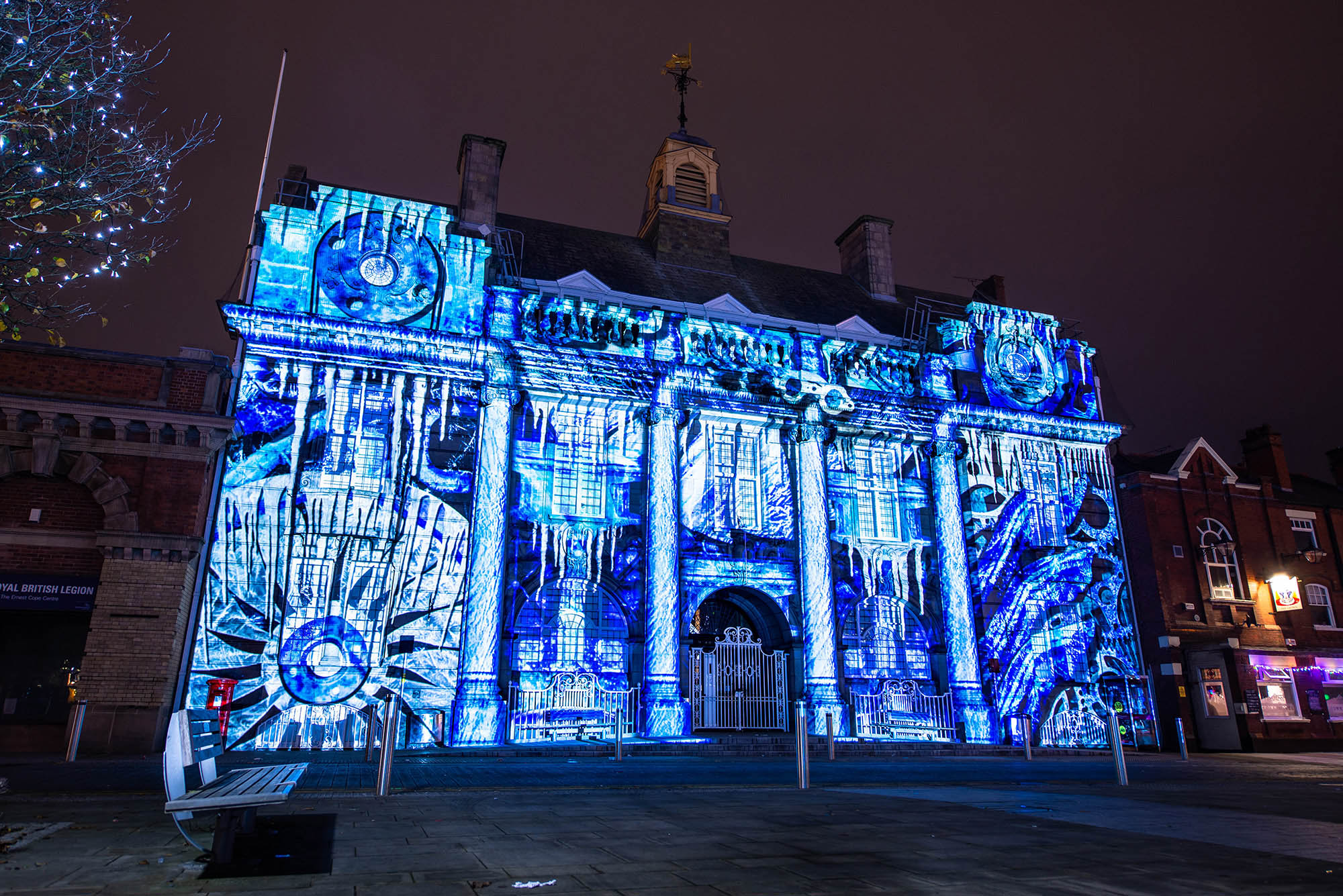 The opening event was hugely successful; seeing more than double the number of people attend than the previous year’s Christmas light switch-on event. The increase in footfall led to a bumper £104,995 spent in local outlets, based on a specially-commissioned survey of families attending. It was encouraging to see long queues in cafes, fish and chip shops and coffee houses that stayed open late for the launch night – proof that lighting events and large-scale outdoor projection mapping events improve the night-time economy of a town centre if everyone pulls together.

“Last year’s Lumen event proved to be a smash hit for organisers Crewe Town Council, with the sparkling launch night attracting more than 11,000 people from across Cheshire and beyond.”
Crewe Town Council

“Crewe launched its all-new Lumen – Crewe’s Night of Lights on November 18 and Double Take played the central role in making the event a huge success. The team were a joy to work with and held up their end impeccably. The fact that the technical and creative element of the project could be handled by one company who also managed the install logistics made our lives so much easier and allowed the Crewe team to worry about keeping other plates spinning”.
Steve McQuade, Town Clerk, Crewe Town Council

“Considering it was such a new and bold addition to our events programme, it couldn’t have been any more successful. Now I’m very much looking forward to Lumen 2019.”
Ben Minshall, Crewe Mayor