Double Take Projections produced a unique outdoor projection event, by revitalising and animating Leith’s much-loved mural depicting the rich and varied social history of Leith. Over the past three decades, the quality of the artwork has decayed. Elements of the original art piece were all but gone. It raised the question “Should we be preserving and protecting street art; or should we leave it to decay?”. Our team was passionate to discover if there was a local appetite to preserve, restore, furlough or replace Tim Chalk’s and Paul Grime’s 1986 masterpiece. 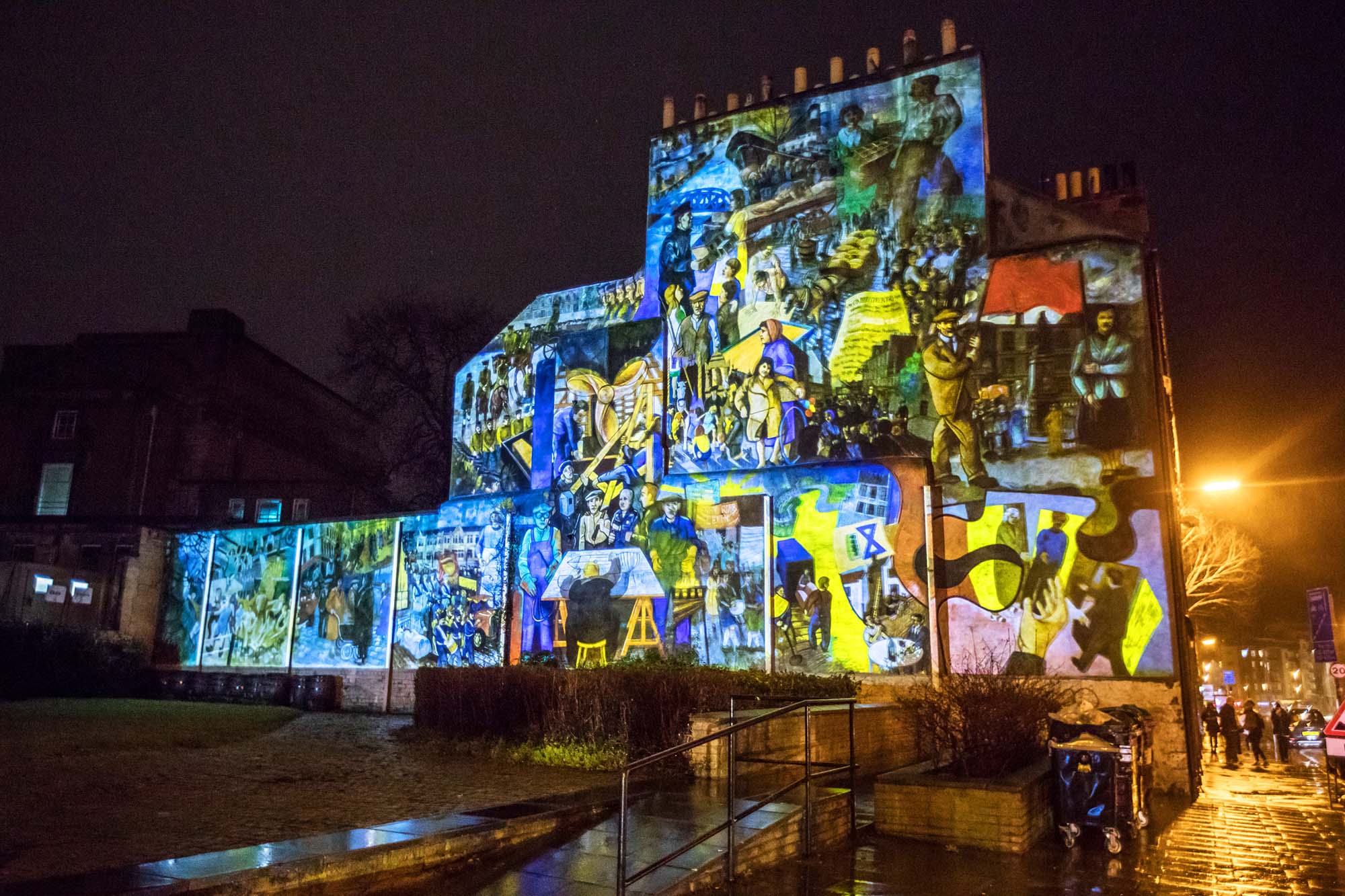 Exposed to the Elements

The Light Up Leith History Projection Mural project stemmed from the Double Take Projections teams’ love for the mural and the desire to return it to its former glory. We partnered with ‘LeithLate’ to create a projection mapping show to feature in their ‘Leith 100’ events to mark a century since the portside community formally merged with Edinburgh.

As a result of being exposed to the elements for over 30 years, the mural has fallen into disrepair. Large sections are wholly faded and resigned to memory. Conscious of how much the mural means to the local community, we wanted to project the original mural back onto itself while adding our animated twist – bringing the painted characters and scenes to life.

Although the outdoor building projection was for one night only, the intention was to spark a conversation about the commissioning of new murals and the maintenance of existing murals in the city. We aspired that the projection would act as a case study and instigate a new era of community-led street art. 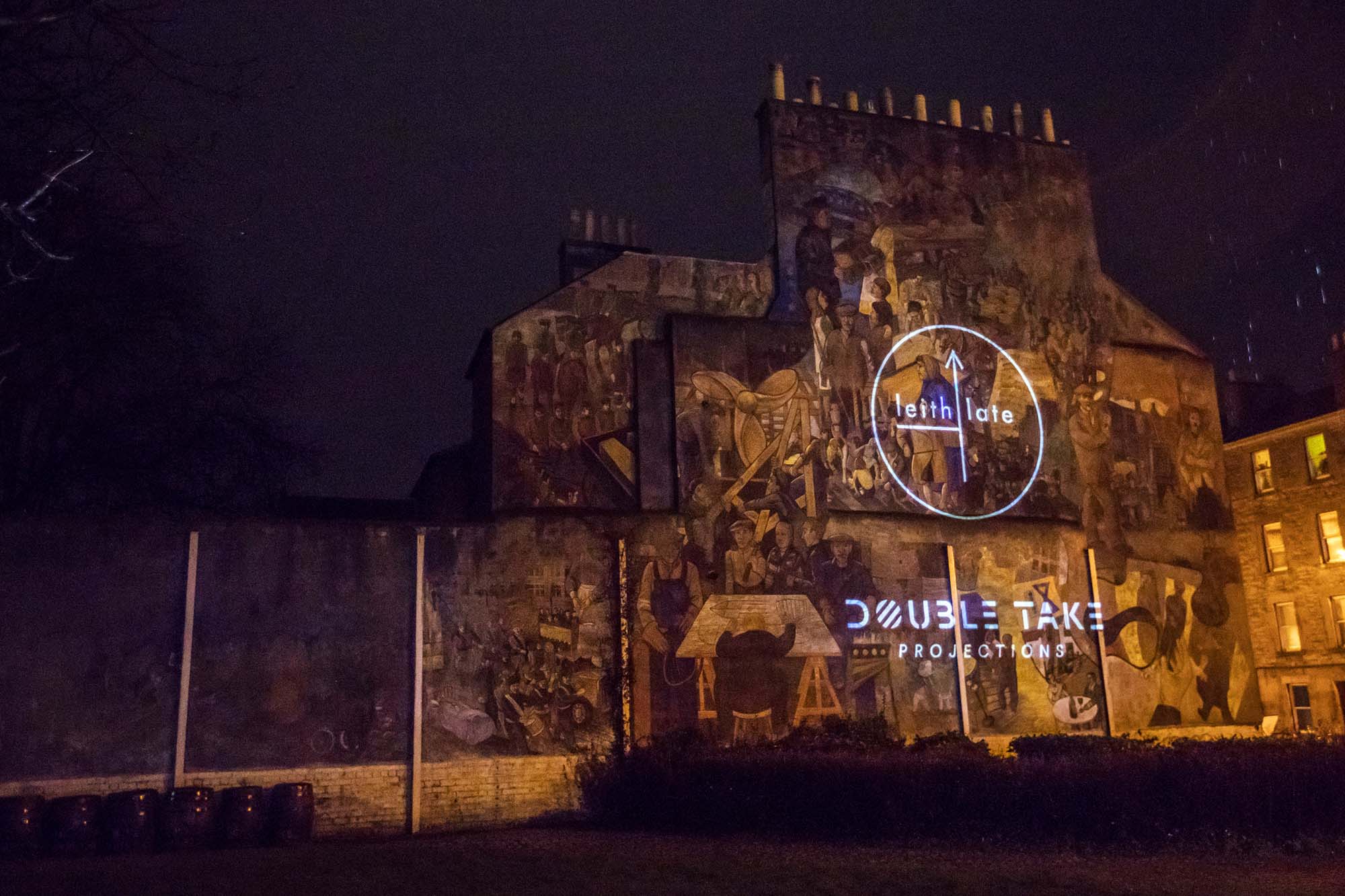 The Double Take Projections creative team met with the murals’ artists, Tim Chalk and Paul Grime, to discuss ideas for the projection mural. We were kindly welcomed along to Tim’s studio to view the original drawings and plans for the mural and hear first-hand the stories attached to each of the depicted scenes. After sourcing an old image, taken shortly after completion of the mural in 1986, we used an AI-based tool to scale the image up to an 8k resolution which acted as the foundation of the animation.

Before the Double Take Projections team could begin animating, there were a few steps. Each character, and all the components that made them up, had to be meticulously cut out in Photoshop with the background painted-in. We created simple character rigs in After Effects. To add visual interest to the sections without characters, we digitally painted-in elements like lighting, shadows, flickering lights, welding torches and fire etc. We wanted all of the intricate aspects of the large-scale mural animation to be working in unison – creating an immersive looping show where viewers could dip in and out – seeing something different every time they looked.

An ambient soundtrack was sourced and paired with sound effects track that we produced using audio samples from dockyards, street ambience, pipe bands etc. – helping the animation to feel like a window into the history of Leith.

1 x 20,000 and 2 x 10,000-lumen laser projectors were used and mounted in our custom-built projection trailer, approximately 20m from the mural. The short-throw distance meant that the visuals were as bright and crisp as possible – creating an engaging experience for the audience. 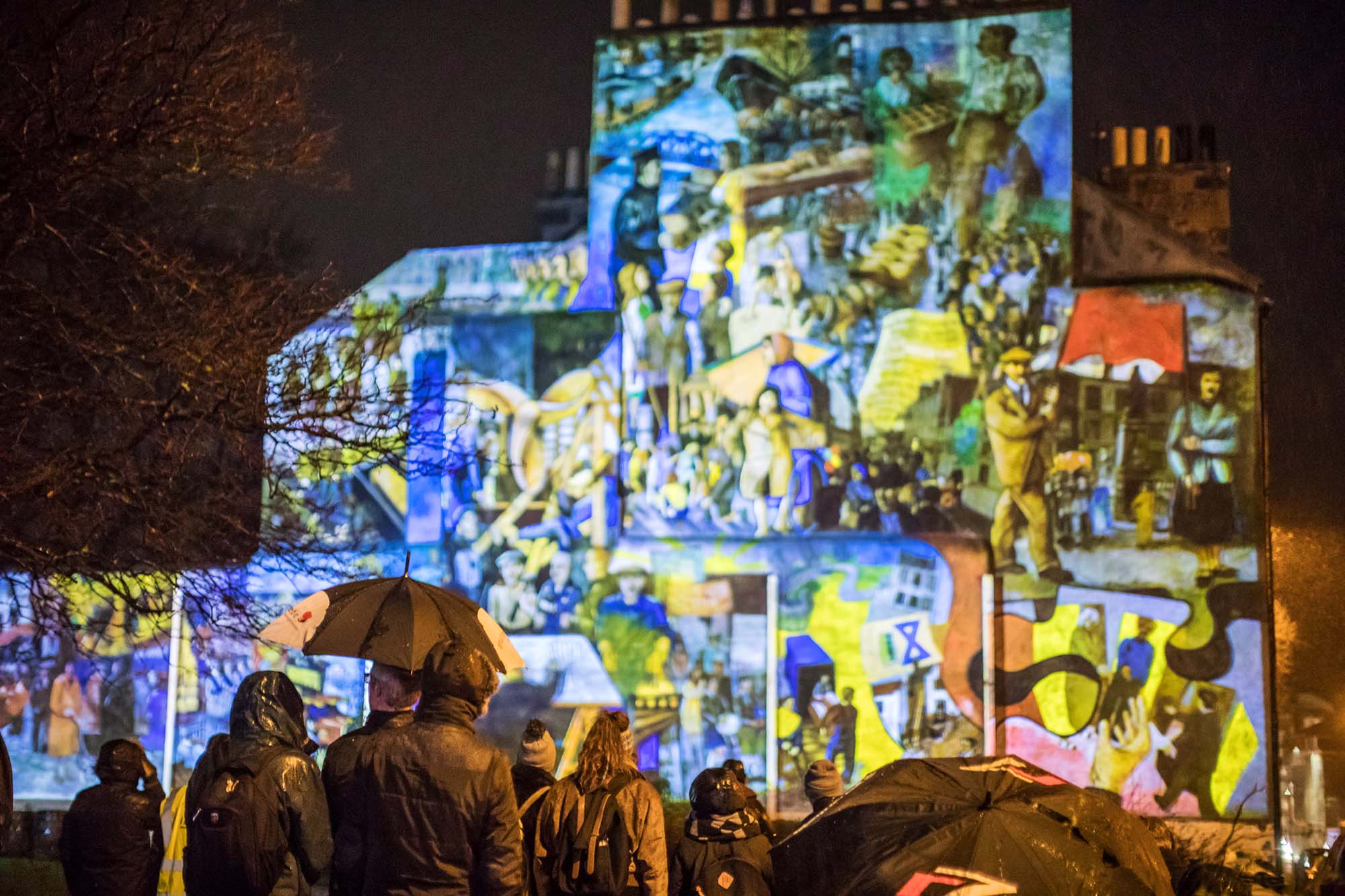 With such some of the worst weather conditions of the year, the Leith community rallied with a high turnout. ‘LeithLate’ have requested that it be brought back in better conditions at the end of 2020. The event was well-received on social media and by the public.

“Congratulations to Double Take and Leith Late for the fantastic projection mural on Saturday! Friends and family I invited along were very impressed and went home smiling despite the foul weather. Very best wishes and congratulations.”
Paul Grime, Mural Artist

“…And I likewise thought it was a triumph. Please let’s do another when the weather is better! Thanks to you all for a great occasion.”
Tim Chalk, Mural Artist

“Just to echo everyone else’s sentiments – what a great event, well done to all of you!”
Morvern Cunningham, LeithLate

“Tonight, I walked past again and it was even more glorious, with a fuller depiction of our area’s collective heritage. I took the opportunity to speak to the guys behind it and learned a little… excellent warm guys with a love of Leith that remember the mural when it was new and throughout. Coolest of folks, passionate about this great place and doing the whole thing for free. For all that can, come along tomorrow night to see the show in full. The depiction is brought to life with moving parts and sound. Also, I ken for a fact the chat will be excellent. For all Leithers old and new (even if you’re not as fortunate and hail from Edinburgh) I think this is a unique event not to be missed.”
Joe Janczak, Local Resident